Good morning Readers … we had a ton of fun at the recent Board of Supervisors meeting this past Monday, October 7th.  If you were unable to attend, let me give you some highlights.  The actual meeting notes are posted on the Greenwich Township Community Facebook Group https://www.facebook.com/groups/170215060197261/ so please go there to review facts.

This blog, while being factual, will also contain opinions and emotional responses … this is where the adventure begins.  Should you care to spend an hour and a half of your day listening to the meeting, I will give you the link to the audio file here https://drive.google.com/open?id=1_-0WdWcxJFBC-UQlbp2G9gijdeL5SHD3

I would like to say (before I get started) I am really tired of the Board of Supervisors always busting on the residents that they only show up to the meetings when there is something the resident is concerned about and don’t come to the meetings all the time.  Well, if all 3,000 plus residents came to every meeting, where would they sit???  Or park???  It is a fact of life that a resident will come to a meeting when there is something being discussed that affects them.  SO STOP SAYING THAT ALL THE TIME. Since this warehouse project was publicly announced, Marc and I have been to nearly every Board of Supervisors meeting and nearly every Planning Commission meeting and every Zoning Board Hearing whether they were about the warehouse or something else. (we have missed three due to personal illness and a family funeral)

And to Mr. Victor Berger … I have answered  your question (Where should we put a warehouse), several times over the past three years.  I have also presented documentation from the State Of Pennsylvania regarding township zoning (that it should be reviewed every five to seven years and possibly changed!!!) You and your board members and your solicitor have totally ignored that information…which came directly from the State of Pennsylvania.  My Response: The industrial zone should be south of I-78.

Public Opinion from Krumsville Community Coalition: “And just because an area is zoned industrial and warehouses are allowed (we’ve never argued that they could not build a warehouse there, just not that particular approx 500,000 sq ft monstrosity), it doesn’t mean that a warehouse that creates a public safety issue and will negatively affect property values should be allowed. In fact, there are two zoning ordinances that specifically address this…so why are they not being enforced or the plans being denied based on those?”

Let’s get this one out of the way quickly.  The township sent a letter to PennDOT asking them (one last time) if they – PennDOT – has done a thorough review on the intersection and the safety of that intersection.  In true PennDOT fashion, they did not answer that question at all … so we sent our own letter back to PennDOT and copied most the people that attended the meeting in November 2017.  Read the three letters here. PennDOTletter101519plus I am wondering if the township solicitors will take notice that the PennDOT responding letter did not answer their question and send their OWN response back to PennDOT.  Hmmmm

ENGINE RETARDER ORDINANCE AND SIGNS.  Mr. Berger, I looked back over the meeting notes for the past six months.  Yes, we did discuss it last month (September).  And the month before (August), and the month before (July) and the month before (June) and the month before (May).  I brought this up originally in April 2019.  I brought you the paperwork that PennDOT requires.  It’s very simple. And I asked about it every month since then. The Board of Supervisors and the Solicitor have not always had a response every month, but I have brought it up every single month.  THIS IS A RESIDENT ISSUE.  The jake-braking along Old Route 22 past the Highland Estates and in the Krumsville intersection is disturbing life for these residents.  The dump trucks and tractor trailers are using their engine retarders unnecessarily all day and all night. I invite you to move into one of the mobile homes along Old Route 22 or in a house in the Krumsville Village for just one week. ONE WEEK of interrupted sleep and the inability to leave windows open for fresh air and you will stop putting this off and pointing fingers and get this ordinance and in place and signs posted. NOTE: If the townships along Route 100 can get signage for NO ENGINE RETARDER, then we should certainly be able to get the same signage. 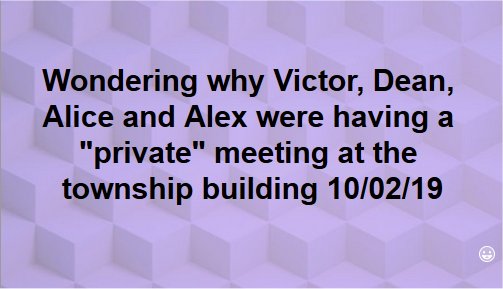 which was asking a question. The Board of Supervisors held and Executive Session at the Township building the evening of October 2, 2019.  My post was taken totally out of context, it was construed that I was insinuating the Board of Supervisors was doing something wrong, the solicitor and board were totally defensive about this.  HEY!  We do know that the Board of Supervisors will (and do) have executive meetings.  Usually they are held just before, or just after, the normal meeting.  This was (apparently) unusual to have the meeting on a different day. Eleven residents reached out to me (one of those residents had seen the first (ugly) post and asked me to remove it.)

Alex (the solicitor) asked me to refrain was putting inflammatory posts on Facebook. (Censorship?) Little did he know about the post I removed … in retrospect, I kinda wish I had left that post there so they could see how the residents REALLY feel about their township leaders.  (sigh) Problem is there is very little trust between residents and township leaders due to the township leaders tendency to withhold information, redirect conversations without answering questions and previous blatant untruths about the pending warehouse project. ( I will refer you back to the posted timeline in which although Sketch Plans for the original warehouse project had been submitted to the township, Mr. Berger went on record, after that submission, at a public meeting stating, “There is nothing to rumors that a warehouse is going to be built at the intersection of Route 737 and Long Lane.”

We use the Facebook Group to keep residents updated on information … I, and all the members of the Facebook Group, have the right to post whatever they wish if it is related to township (and adjacent township) things that affect them.  I do monitor the posts and there are rules on the Facebook Groups that there is not allowed cursing or snarkiness.

NOW!  I ask Alex (solicitor) … what about censoring your Township Officials.  In case they decide to go out and delete their posts off the Facebook Groups, I have screen shots of their snarky posts.  Posts that bust on me, bust on Fred, bust on Kay (specifically) and they have busted on other residents who chose to post negatively about the Board of Supervisor members or the Planning Commission members.  WHY WERE THEY NOT PUBLICLY WHIPPED ABOUT THEIR POSTS??? Personally, if that post affronted Alex, and whomever sent Alex the email, so much – they could have simply picked up the phone and called me and asked me to remove it or reword it and I would have! It was not meant to enrage anyone.  It was simply asking the question that the residents were asking. Instead, Alex (solicitor) chose to publicly beat me up about that post.  Gee, thanks for that.  And we wonder why you feel there is a rift between the residents and the township officials.

One of the residents asked at the meeting tonight why Victor is always calling out Dodie, or The Deitrichs, or Fred … My unspoken response to that is because we are the vocal ones at the meetings, asking questions, demanding answers and not letting sleeping dogs lie … we keep prodding those sleeping dogs over and over and so we are the ones that get bit on a regular basis.

I do not attend the meetings just for the warehouse project battle.  I have become thirsty for truth in our township.  I share that truth to the residents that care to read about it. I refuse to censor my posts or my blog so that the feelings of the members of the board or planning commission or the solicitor are not “hurt” or their emotions are not “stoked”. It is my right and I will exercise my right.