Since I’m working Penny Pony this year, and we’re concentrating on teaching her basics on the Luxury Distances (25 and 30 miles) I had absolutely no plans to go to Vermont.

One day, while I’m minding my own business and blowing time on Facebook, a message comes up ..

“What plans do you have for Steel for Vermont?”

And so Ro and I developed a plan to take Steel to Vermont.

Steel has done a lot of rides so far this year, but all of them have been babysitting Penny Pony on the Luxury Distance.  Ro expressed some concern and I reminded her that I yanked Steel out of the pasture after sitting around for 3 months, two years ago, and took her to Mustang and did a 75 mile ride. I told her that she was really on her game this year (as her young 18 year old self) so not to worry.  Ro had already competed on her at NJ100+ ride.  And was planning to ride her at the Muckleratz 30 mile ride.  I felt confident that was enough miles for Steel and Ro to have a bit of a relationship before heading off to the mountainous wilds of Vermont to compete on 75 miles.

Seeing as I had been waiting on a Neurosurgeon appointment for over three months, and it was the Thursday before the Vermont ride, I suggested that Ro go up and I’d follow.  She said we could leave at midnight and be at camp by 8:00 am Friday morning.  I promised that since I would most likely sleep all the way up, I would setup camp and she could sleep.

Because Ro has the big living quarters trailer and big truck, we decided it best to take her rig. I took everything over to Ro’s house during the week so all I had to do was catch Steel and walk her down the driveway to load up (our driveway is narrow, steep and has overhanging trees.  Not a good idea for Ro to bring her rig up the hill)

Now, Steel has been with me five years now and she knows, when I come out into the pasture at 11:45 pm, it is to go to a ride.  As soon as she sees my car come down on the lawn and the lights are shining out into the pasture, she starts running.  Penny Pony has no clue and she’s like, “Hey! I’ll go with you.” as she comes up to me not once, not twice, but four times while I was trying to catch Steel.

Finally, after only 20 minutes, I catch Steel and we walk down the driveway.  She loads right up and we’re off. Vermont, here we come. 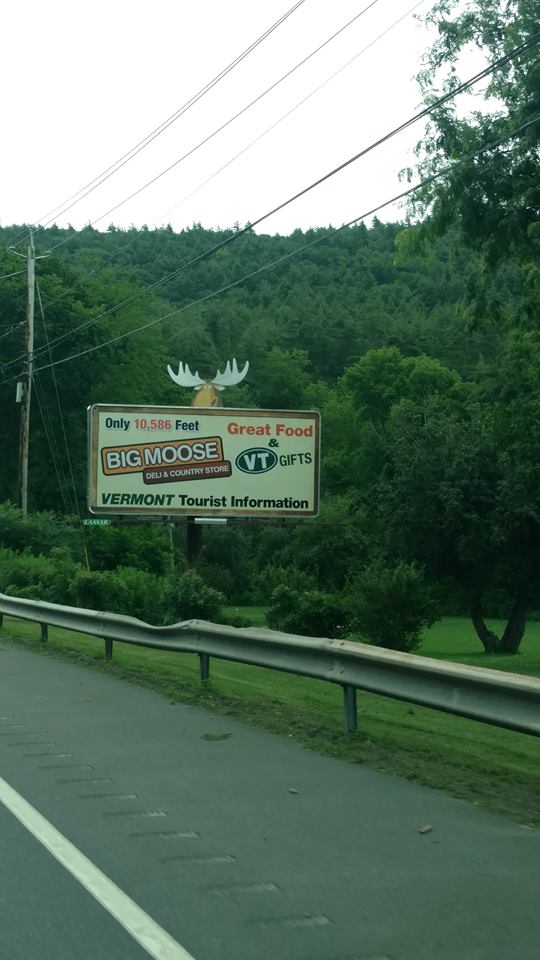 Most pictures here are stolen from Dom or Mike Turner.  I’m sure they’ll have me arrested, but as their photos are to die for, I will risk the imprisonment.

The ride there was totally uneventful.  Well, for me anyway, as I slept about four hours of the trip.  For Ro?  I have no idea.  She didn’t really sleep before we left so now she’s been up for over 24 hours and she’s driving.  I have a lot of respect for that!

We arrive just before 8:00 am and unload Steel.  Now, while Steel has been on a hi-tie, it’s not her favorite.  AND, this is the first time I took her to a ride for camping without one of her barn buddies, so I wasn’t sure how this was going to go.  While Ro was sleeping, I setup her corral.  Ro said she had a charger for it, we might need that.  Kathy and Loni were parked next to us and Cowboy was on a hi-tie right next to Steel and she was happy. 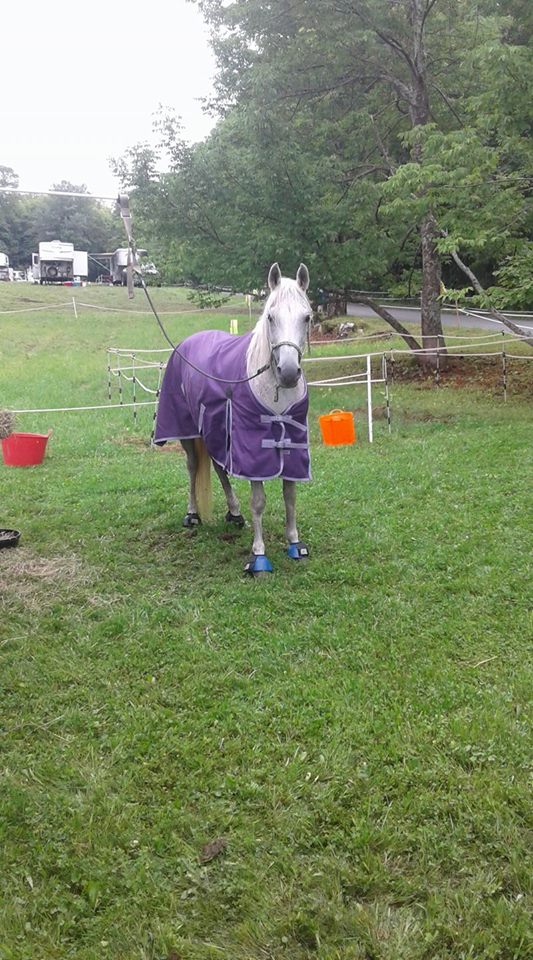 Maybe a little TOO happy because every time Loni or Kathy took Cowboy for a walk, Steel got all beside herself.  She called and paced, and generally became annoying, until Cowboy came back.  We tried to explain to her that tomorrow would be a sad day for her as Cowboy was leaving at 5:00 am for the 100 mile race and she had to stay behind and wait until 9:15 am to leave on the 75 mile race.

It’s mid-July and Steel is wearing a blanket.  Can you imagine that??? The day is chilly and damp.  We left Pennsylvania, at midnight, and it was 72 and humid.  We arrive in Vermont to damp chilly misty conditions and the high for the day was only 59.  I did not bring the appropriate clothing to this ride.  I did bring a sweat shirt and light pants for running crew into the night, and I had to don them earlier than expected.  I mean, it was CHILLY all day. 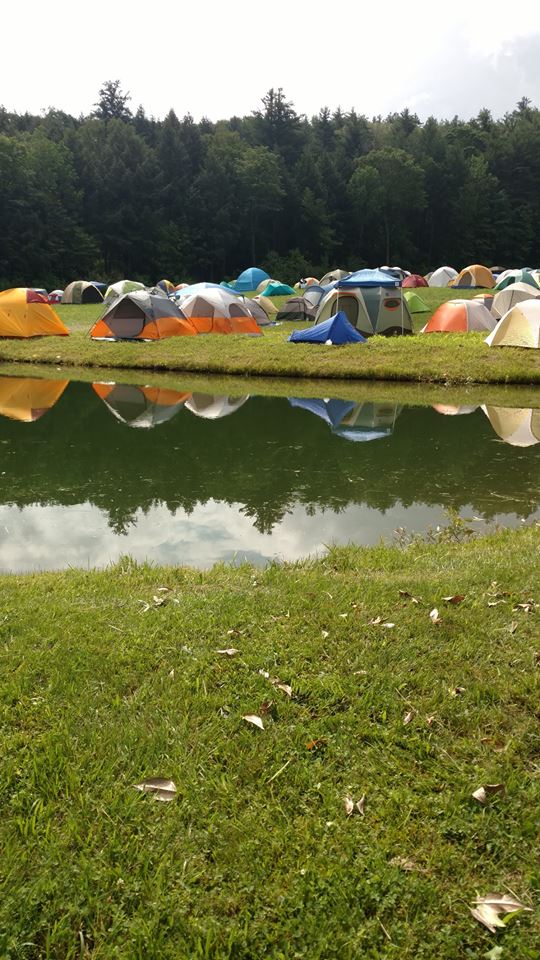 Spent most the day visiting with people all over camp.  Nothing exciting happened.  Or maybe it did and I missed it because I was visiting.  The runners were steadily coming in all day and setting up their tents.  Oh, did I mention that Ro and I had our own little pond?  it was full of crawdads and salamanders and fish.  I was wishing it was a warm sunny day so I could walk around in it and do some crawdad hunting.

The ride meeting was pretty straight forward, however I will say this.  I was glad I wasn’t riding because I got all confused about white plates in the yellow plates and orange first and then pink and what … I partly think that’s because I started to doze during the meeting.  I was very tired by this point.  On and off four hours of sleep while driving here wasn’t cutting it for me.

Ro said she got it, and that’s all that mattered.

Ro was riding the next day with Evelyn and Jeff.  Mike and Dom were their crew.  I was gonna have the most terrific day, running all day with Mike and Dom.  I WAS READY!

We were both getting sleepy by 7:00 pm.  A little early for me, but as soon as I hit the mattress I zonked out.  And was sleeping pretty hard when I heard what sounded like a race track outside the trailer.

I went over and had a discussion with her that “No, all these cars do not mean it’s time for you to get going on  your ride and Yes, I have to pee so stop it so I can go do that.”

After a bit the traffic stopped and I heard tons of cheering.  100 mile runners are off.

Back to bed.  But not for long.

Ro gets up, I lay there to hear and apparently as Cowboy is preparing to leave for his 100 mile ride, Steel is all concerned he’s going to leave her all alone next to three strange horses.  Oh my gosh, she’s a pain in my ass.

I tell Ro I’ll get up and she should go back to bed.

Honestly, I can’t remember which one of us actually got up to chill Steel.

I go out and feed Steel, clean her paddock and clean up Cowboy’s hi-tie area.

That killed half an hour. 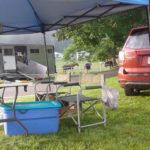 Oh, there’s Mary Coleman, I’ll go hang out with her.  Steel is totally relaxed now and as the sun is coming up, maybe I can go take her blanket off.  That’s right, we needed a blanket on Steel in the middle of July.  Ridiculous weather.

We are not complaining, though.  Temps today are to be in the mid-70’s with partly sunny skies, low humidity and a breeze.  Perfect 75 mile riding weather!!!