I am all excited to now test Penny on a two day 50 mile ride.  She is showing great talent for this sport and the 25 mile distance is no longer a challenge to her.  She is finishing the rides with tons of gas in the tank and spring in her step.  She is looking 20 miles down trail the entire time so I am thinking to put her on a 50 mile ride this year.

I reached out to Rowena and said, “Hey – whatcha doing this weekend?”

Of course, she was suddenly available (chuckle) and she agreed to navigate Steel around the course for two days.  As we were going to be there for an extended stay, we decided to load everything into her rig so we’d have better sleeping accommodations.  This is interesting, trying to get enough of my stuff out of my trailer and then into her trailer without over doing it. 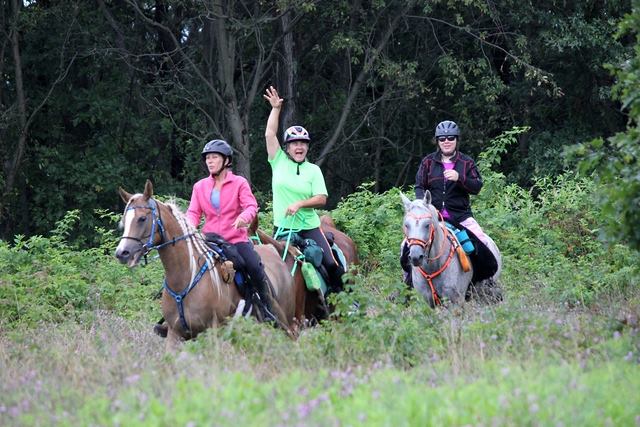 We had an absolute blast on trail Saturday.  Renee joined us, and if you read last year’s Muckleratz story, you will know that while it is the same three silly girls on the team, we had two different horses.  Joy was confused by the changes.

Steel had some complications at the end.  She had a little cramping going on and almost didn’t get to start the ride.  At vetting Friday night, the vet thought she looked “off” so said that she could trot out again in the morning to be certain she could go.  Ro did some massage work on her Friday night and again Saturday morning before trotting out and they did let Steel start.  At the halfway hold, Steel’s left rear was still kinda of crampy so massage massage massage to keep going.

Ro had entered Steel into the 2-day 50 mile ride.  Me, still being conservative about my rides due to my back, had entered the 25 for each day.

Penny decided she had nitro in her tank at this ride.  She took off from her group and rode several miles alone, booking along at around 13 mph.  At one point, she suddenly realized she was alone and she stopped, looked around and started hollering.  I told her to stop being a baby and get on down the trail.  She didn’t believe me that it was safe to continue alone until a couple riders started coming up behind her, then she was like, “Oh No!  I am first.” and off she went again.

I did wait in a grassy area for Ro and Renee to catch up.  Mostly because I prefer to ride with someone – time passes faster that way.

Later, at the awards, Penny won the “Best of the Rest” breed award.

When I went up to get her award, I heard someone in the audience ask, “Well, what is Dodie riding?”

A voice answered, “A Saddlebred.”

A second voice chimed in, “No, she’s riding Nitro!”

Oh, that made me smile.

Then they started with completions, and didn’t call my name.

Ohhhh, we made it into the top ten for our scoring.

Hey … maybe I got forgotten?  Seriously, we really made it into the Top 5?

Her score card was remarkable, 98.5 out of 100.  Muckleratz is a relatively easy trail, but there is hill work and it is deceiving because you are rolling up and down when on top of the ridge.  Penny Pony handled the hills like a true mustang. She would have had a higher score but for her ending HR.  In a CTR, 44 bpm is the goal.  Her’s was 52.  She is getting better, and as for an endurance ride, 52 is a great HR.

Now comes the fun part of this ride.  I will keep it simple because it’s not my story to tell.

At dinner, we had chicken.  It was delicious.  However, Ro apparently got some chicken stuck in her throat.  She suffered with it all evening.  I mentioned we should probably go to the hospital and have it looked at.  She assured me this was a common thing for her and it would pass.

We went to bed, she still had that chicken stuck in her throat.

We got up in the morning, still there and she finally agreed that we needed to go home so she could go to the hospital.

I drove her rig home. She was definitely in agony.  Her mom met us at the driveway and whisked her away while I fretted and worried.

They got it out and she made a full recovery.  Whew!

I am going to enter her into the Hector Half Hundred.  It is a very easy 50 mile ride with lots of cool things to see (like riding through cow pastures, with cows in them!) and I believe Penny will do okay.  The other thing I like, the second hold is away, so Penny will have no choice about getting back on trail for a final loop.

Wonder if Ro would like to ride Steel and be Penny’ babysitter? 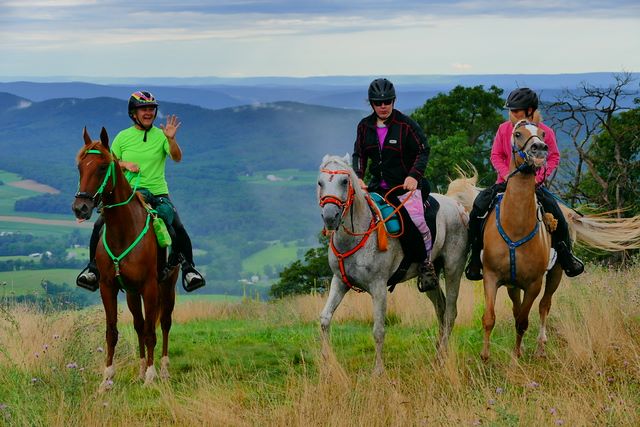