This is Bombardier’s sire. (click images to enlarge them)

Shrapnel’s story.  I was contacted by a person I have never met.  He found me through my endurance network.  Apparently, there was a dollbaby Arabian stallion about to be euthanized as his owner had passed and this fella wanted to save his life so was reaching out to people to give him a home.  Did I need another stallion when I already had two Appaloosa stallions?

But, after hearing this man almost in tears on the phone, listening to his passion for this particular horse, and talking to some Arabian breeders about his pedigree, I decided I would give him a chance at my barn.  Worse comes to worse, I euthanize him here.

And so it began, I fell in love with Arabians.

He was 19 years old, never broke to saddle.  I was riding him in three weeks.  He wanted to do everything I asked him to do.

He was 19 years old and had never bred a mare.  I got him not one, but two mares so he could have his own harem.  He was as kind and gentle to them in the field as if he had lived with mares his whole life.

He was 22 years old when he passed away from choke.  He had been prone to choke years before I got him (one of the things I was told in his health records) and as he aged, he choked more and more often.  We finally had to say goodbye to him.  He had four foal crops.  Five full Arabian foals and three Appaloosa/Arabian foals.  Every one of them is the sweetest horse and they have all been easy-peasy to train to saddle.  Just like Shrapnel. 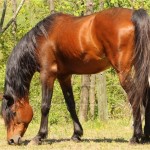 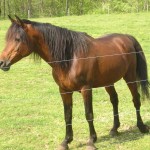 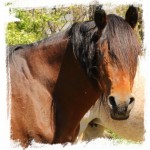 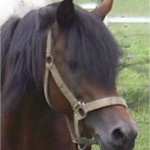