I have been a slacker on getting this story written.  Penny did a fabulous job (on the second loop) at Blackwater Swamp Stomp and I was very excited to keep her going.  Unfortunately, the weekend after that ride, we had a quickie 5″ of snow and her and Grasshopper decided that was the best time to play really hard.  Apparently, Penny slipped or slip or something and strained her left rear suspensory ligament.

So, now Penny is off from working and poor Steel had to step up to the plate.  Steel and I did the Chesapeake CTR.  Thinking that I might be able to get a versatility for Steel this year, if I wasn’t going to be able to ride Penny, I did the ride “judged” so she didn’t wear her interference boots.

BAD CHOICE ON MY PART.

Poor Steel gave herself boo-boo’s on her legs during the ride.  She did complete in 9th place, but the ECTRA Versatility Award is right out the door.  She will have to do any CTR’s in the future wearing her leg protection, which means she can only do Pass/Fail, the Performance Division. She will be able to earn mileage credit only.

So … March 10th Penny gives herself a strain.  Talked to the vet who said if she isn’t moving soundly in 30 days, they will do some more intense testing, but for right now, keep her locked up resting.

WHAT???  Sorry, no-where to lock up my horse and I am in total disagreement with that treatment regime.  I am a firm believer in letting a horse keep moving while healing (ask me about Numbers and her broken leg!)

And Penny isn’t hobbling, she’s just “off” and the leg is puffy on the inside.

I smile and nod my head and agree to keep her locked up for 30 days.

Okay, I get back from Chesapeake and I’m missing Penny’s ride a lot.  Steel is marvelous, but she’s no “machine”. I watch Penny carefully and she’s not been “off” for about a week so I decide I will take her for a buggy ride and see how she looks.

My high school friend, Jeanne came to visit over the weekend of April 9th, so I put off taking Penny out until after her visit.  We do a quick 8 miles in the buggy on April 11th and she looks great.  I know because I had a great view of her butt for 8 miles.

Okay, the following weekend, April 16th, Ro and I head out to Ontelaunee with her new guy, the horse with twenty five names, and to do a slow walk and trot ride.  Well, that didn’t go as planned. Penny and Mooch were lively and wanted to work so we actually did 10 miles at a pretty good pace.

Penny never took an off step that entire ride.  The follow day there was a slight puff in her rear leg but no heat and she wasn’t off so I was hoping she was mending well.

I let her alone all week and Ro and I went to Trexler on April 23rd to work Penny and Mooch some more.  Trexler has a lot of hill climbing, and Penny is not the best at the uphills.  She does not have the butt built-up conditioning at this point in  her career and she struggles.  Mooch, on the other hand, has a butt like a god and can pull a hill like Miss Daizy used to do.  He’s a monster truck!  Love riding with him!

We do a semi-hard workout of 10 miles and Penny did great.  I put her Renegade boots on for this ride and she had four blow outs.

I think I  need to readjust these boots.  I am hoping someone out there close to me knows the secret because I really do not want to put her in shoes since we’re only doing 25 mile rides this year.

Okay.  Next day after this conditioning ride, nothing.  No puffy, no offness, nothing to indicate that her ligament was ever compromised.

She’s going to Cheshire.  And doing it barefooted since I can’t get the hang of these Renegade boots.

Kelsey was looking for a ride so I offered her Steel.  Told her that she would have to ride in the Pass/Fail (so no awards) and Kelsey just wanted to compete.  She was okay with that.

This CTR sport requires a lot of things from a horse, more so than an endurance ride.  I like starting new horses in CTR’s because they get all kinds of experiences that they would not get at an endurance ride.  This is Penny’s first CTR (and only her second competition) and she really surprised me all day.

Standing around waiting is the hardest part.  We get to base camp and get all vetted in and then we wait. She’s tied to the trailer with a water tub and a hay net and she stood there like a seasoned horse eating and drinking (and yes, even peeing) while we wait.  She didn’t get impatient or even get stressed.

We do the ride meeting and it’s the same loop twice.

Anyway, should be easy enough to not get lost! Especially on the second go around.

Renee is going to ride with us so it will be the three of us starting with two newbie CDR riders.  (CDR is the intro ride, only doing one loop) Ben tells me to take care of them and I’m like – yeah, like that’s not going to happen!  I know as soon as we get on the trail penny is gonna get into her big-ass-trot and the newbies will be on their own.

And that’s exactly what happened. 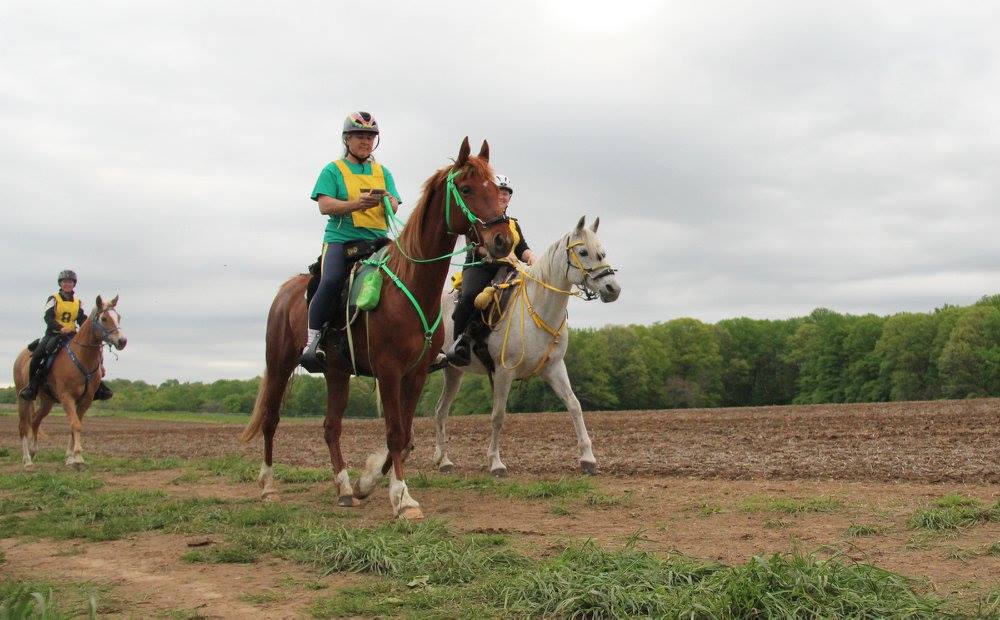 Penny took the lead right from the start and set a lovely pace.  Okay, lovely for me, maybe not so much for Steel and Joy.  I did hear a lot of cantering going on behind me all day. Penny has the biggest trot ever.  In this picture I am setting up my “Ride-O-Meter to track speeds, etc.

So, the trail was very well marked.  There were bright pink arrow signs, ribbons every three feet, and big white “notice” signs telling us when there were obstacles or trail marking issues.

Funny story.  One big white sign said, “No trail markers for .7 miles” and it had a couple ribbons on it.  Penny was working the trail in the lead and would reach out her nose to touch the pink arrow signs as we passed them. She reached down to touch this sign when a gust of wind came and blew the ribbon into her nose.  She literally jumped up and sideways with a snort and stomped at the sign.  It was hysterical!

Later, we were passing another white sign and she went into fire-breathing-dragon mode and stomped over to that sign as if daring it to bite her.

There were a couple times, especially when we entered onto single track trail in the woods, that Penny was not as smart as Steel and Steel got to lead the ride.  I have to say, after five years of competing Steel (running behind Miss Daizy) she has really turned out to be a great lead horse, when asked.  She doesn’t care to do it all the time, but on the single track trail, Steel can burn up some miles. 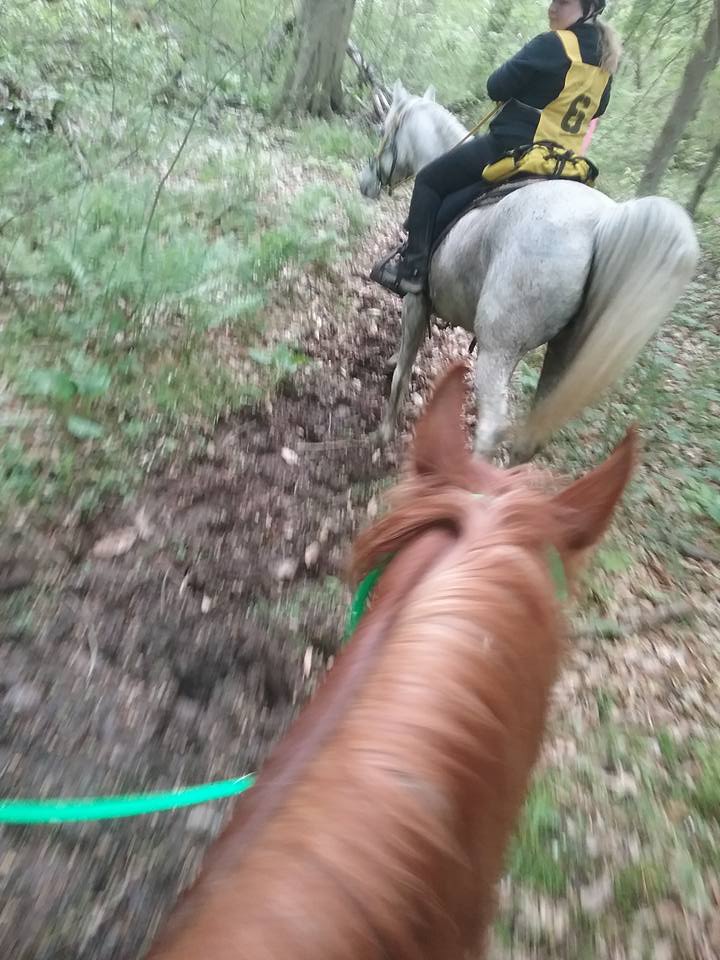 On the first loop they had a hospitality station setup.  It took Penny all of one second to understand this was where the carrots were.  She put herself right in the front to get her carrots and apples.  The second time we came into this spot, she dashed right over to the carrot lady without me even asking her to.  She is very smart! 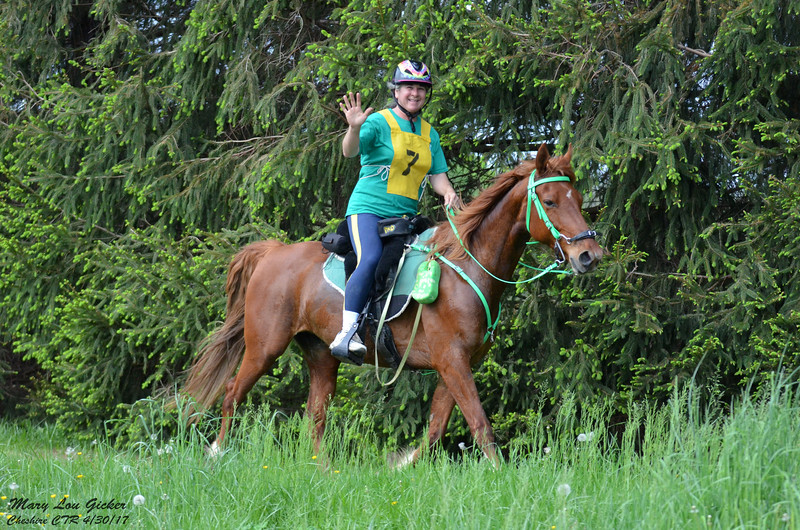 She was remarkable on the first loop.  I was prepared for a brain meltdown and she was like an old pro.  We passed all the groups of riders and were running out front.  We did have a couple riders come up behind us and pace along with us for awhile and she did not get excited or rammy.  She did not particularly like Beth’s gelding, so she did some ear pinning when he got too close, but other than that, I rode her on a loose rein all day.

We stayed in hold for 35 minutes.  Renee was concerned and I told her that we would finish in plenty of time.  Little did I know that on second loop, all three horses were starving and most the field we crossed was foot high grass so they wanted to stop and chow down.  Our second loop was not as fast as the first loop.

Coming into the finish, Penny already knew where her trailer (and food) was located so it was very difficult to get her past the trailers and up to the timer.  Seriously, she kept trying to duck out and go back.  It was the most comical thing I had ever experienced.  She KNEW her food was at that green and white trailer so why the heck did she have to walk all the way up here?

I don’t know how Renee and Kelsey enjoyed their ride, but I was on top of the world and smiling the entire day – even if we did do the same loop twice.  Penny was a rock star all day. 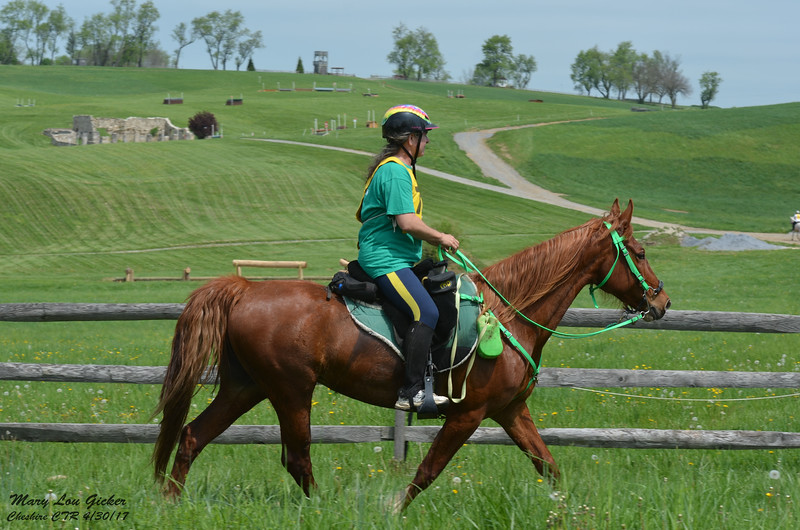 Well – until the final P/R.

Remember how I told you that CTR is hurry up and wait?  Well, final P/R is 20 minutes after we get into camp.  Penny spent her 20 minutes eating everything in sight.  As we made our way to the pulse taker, she was grabbing grass and yanking me around trying to eat.  In the pen getting her pulse, she wanted to eat, not stand there and wait while someone took her pulse.  She was really struggling with the whole concept of stand here quietly while Robbie counts.

Robbie said her heart rate started really slow, like in the 40’s slow.  At final pulse, they have to count the HR for a full minute.  60 seconds was much too long for Penny to stand there.  Robbie was almost finished with the count when Penny started throwing her head around trying to get to the grass.  Her heart rate shot up.

We have to start over. Steel is just starting her final pulse when three riders gallop up to the timer who is right behind us in the pulse pen.

Penny spun around to see what was going on.  Steel jumped and her HR went up.

So we start over.  Now Penny is furious at me.  She does not understand why she cannot eat this grass and why this other person keeps pushing on her girth area and then she nips at me.

Not today, you don’t!

And (of course) heart rate shoots up again.

Steel is finished but Penny is now done with standing here and she wants out.  She is stomping her foot, nipping at me and Robbie.

Cate comes over and takes control.  Does a count and we get 60.

I know Penny’s heart rate should have been in the 40’s, and if she passes at 60 I will take it but it will count against her at the scoring.  That breaks my heart because she was a rock star all day.

AND NOW WE WAIT (for final hands on judging) 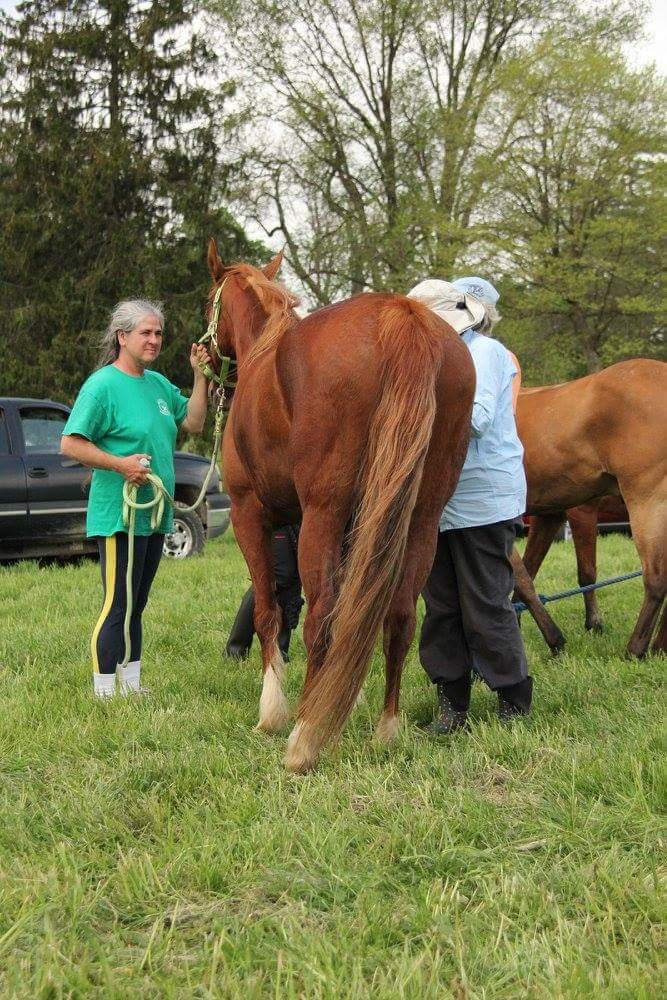 You know what?  She was a perfect lady for the hands-on portion of today’s ride.  Of course, by now she’s had an hour to fill her tummy, and drink and pee (again) so she’s totally relaxed.  No changes.  NO CHANGES??? No changes!  She is a perfect CTR  horse.

She finished 6th place.  If she had not lost all those points for her final pulse, she could have been Grand Champion at this ride.